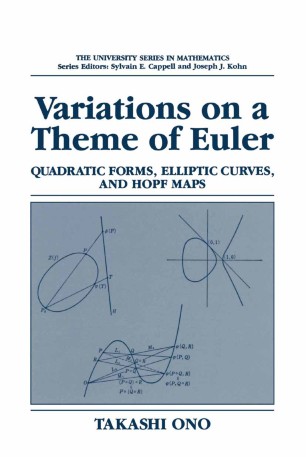 Variations on a Theme of Euler

The first six chapters and Appendix 1 of this book appeared in Japanese in a book of the same title 15years aga (Jikkyo, Tokyo, 1980).At the request of some people who do not wish to learn Japanese, I decided to rewrite my old work in English. This time, I added a chapter on the arithmetic of quadratic maps (Chapter 7) and Appendix 2, A Short Survey of Subsequent Research on Congruent Numbers, by M. Kida. Some 20 years ago, while rifling through the pages of Selecta Heinz Hopj (Springer, 1964), I noticed a system of three quadratic forms in four variables with coefficientsin Z that yields the map of the 3-sphere to the 2-sphere with the Hopf invariant r =1 (cf. Selecta, p. 52). Immediately I feit that one aspect of classical and modern number theory, including quadratic forms (Pythagoras, Fermat, Euler, and Gauss) and space elliptic curves as intersection of quadratic surfaces (Fibonacci, Fermat, and Euler), could be considered as the number theory of quadratic maps-especially of those maps sending the n-sphere to the m-sphere, i.e., the generalized Hopf maps. Having these in mind, I deliveredseverallectures at The Johns Hopkins University (Topics in Number Theory, 1973-1974, 1975-1976, 1978-1979, and 1979-1980). These lectures necessarily contained the following three basic areas of mathematics: v vi Preface Theta Simple Functions Aigebras Elliptic Curves Number Theory Figure P.l.