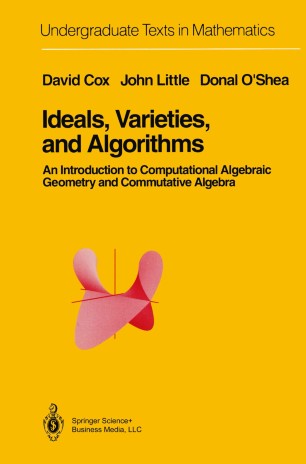 An Introduction to Computational Algebraic Geometry and Commutative Algebra

We wrote this book to introduce undergraduates to some interesting ideas in algebraic geometry and commutative algebra. Until recently, these topics involved a lot of abstract mathematics and were only taught in graduate school. But in the 1960's, Buchberger and Hironaka discovered new algorithms for manipulating systems of polynomial equations. Fueled by the development of computers fast enough to run these algorithms, the last two decades have seen a minor revolution in commutative algebra. The ability to compute efficiently with polynomial equations has made it possible to investigate complicated examples that would be impossible to do by hand, and has changed the practice of much research in algebraic geometry. This has also enhanced the importance of the subject for computer scientists and engineers, who have begun to use these techniques in a whole range of problems. It is our belief that the growing importance of these computational techniques warrants their introduction into the undergraduate (and graduate) mathematics curricu­ lum. Many undergraduates enjoy the concrete, almost nineteenth century, flavor that a computational emphasis brings to the subject. At the same time, one can do some substantial mathematics, including the Hilbert Basis Theorem, Elimination Theory and the Nullstellensatz. The mathematical prerequisites of the book are modest: the students should have had a course in linear algebra and a course where they learned how to do proofs. Examples of the latter sort of course include discrete math and abstract algebra.