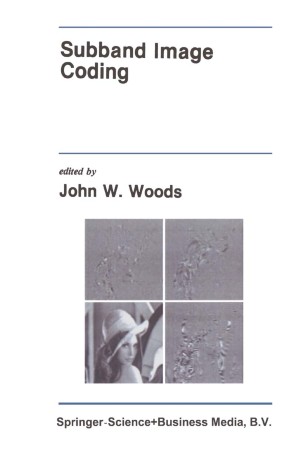 Part of the The Springer International Series in Engineering and Computer Science book series (SECS, volume 115)

This book concerns a new method of image data compression which weil may supplant the well-established block-transfonn methods that have been state-of-the­ art for the last 15 years. Subband image coding or SBC was first perfonned as such in 1985, and as the results became known at first through conference proceedings, and later through journal papers, the research community became excited about both the theoretical and practical aspects of this new approach. This excitement is continuing today, with many major research laboratories and research universities around the world investigating the subband approach to coding of color images, high resolution images, video- including video conferencing and advanced tele­ vision, and the medical application of picture archiving systems. Much of the fruits of this work is summarized in the eight chapters of this book which were written by leading practitioners in this field. The subband approach to image coding starts by passing the image through a two- or three-dimensional filter bank. The two-dimensional (2-D) case usually is hierarchical' consisting of two stages of four filters each. Thus the original image is split into 16 subband images, with each one decimated or subsampled by 4x4, resulting in a data conservation. The individual channel data is then quantized ·for digital transmission. In an attractive variation an octave-like approach, herein tenned subband pyramid, is taken for the decomposition resulting in a total of just eleven subbands.