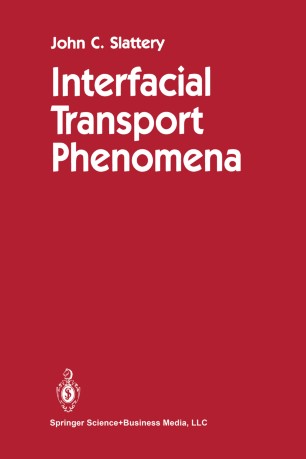 Transport phenomena is used here to descril>e momentum, energy, mass, and entropy transfer (Bird et al. 1960, 1980). It includes thermodynamies, a special case of which is thermostatics. Interfacial transport phenomena refers to momentum, energy , mass, and entropy transfer within the immediate neighborhood of a phase interface, including the thermodynamies of the interface. In terms of qualitative physical observations, this is a very old field. Pliny the EIder (Gaius Plinius Secundus, 23-79 A.D.; Pliny 1938) described divers who released small quantities of oil from their mouths, in order to damp capillary ripples on the ocean surface and in this way provide more uniform lighting for their work. Similar stories were retold by Benjamin Franklin, who conducted experiments of his own in England (V an Doren 1938). In terms of analysis, this is a generally young field. Surface thermostatics developed relatively early, starting with Gibbs (1948) and continuing with important contributions by many others (see Chapter 5).