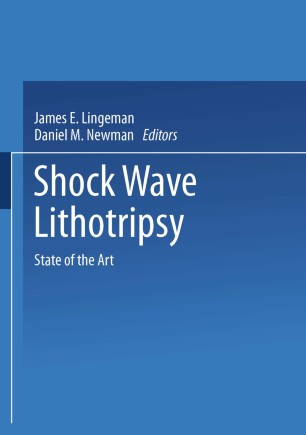 State of the Art

Extracorporeal shock wave lithotripsy (ESWL)" arrived in the United States in February of 1984 with explosive impact in the field of urology. The first ESWL treatment in the United States with the Dornier H~ device occurred at the Methodist Hospital of Indiana, and by the end of 1984, In spite of the rapidly the United StatesESWL study group had accrued over2,5()() ESWL treatments. accumulated experience at the six institutions involved in the FDA trial of the Dornier HM] device, other urologists in this country and around the world had little opportunity to gain knowledge about the utilization of this revolutionary technique. For this reason, the Methodist Hospital of Indiana organized the first symposium on shock wave lithotripsy in February of1985. Interest in this meeting was intense, as approval of the Dornier device had occurred only a few weeks earlier in December of 1984. Because of the success of this initial meeting, subsequent meetings have been held annually in Indianapolis. Following the third annual symposium on extracorporeal shock wave lithotripsy in March of 1987, a number of participants and attendees requested that the information presented at the meeting be made available. Therefore, plans were made to publish the proceedings of the next meeting which occurred March 5 and 6, 1988. The Methodist Hospi tal ofIndiana' s 4th Symposium on Shock Wave Lithotripsy: State of the Art was the best attended meeting to date with over 650 registrants from 36 states and 24 countries.