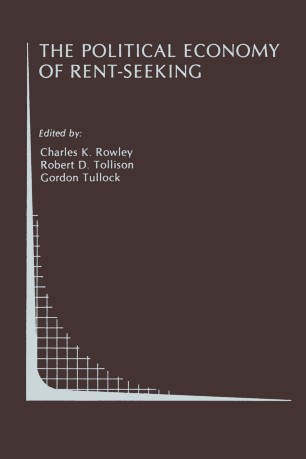 The Political Economy of Rent-Seeking

Part of the Topics in Regulatory Economics and Policy book series (TREP, volume 1)

It is now twenty years since the concept of rent-seeking was first devised by Gordon Tullock, though he was not responsible for coining the phrase itself. His initial insight has burgeoned over two decades into a major research program which has had an impact not only on public choice, but also on the related disciplines of economics, political science, and law and economics. The reach of the insight has proved to be universal, with relevance not just for the democracies, but also, and arguably more important, for all forms of autocracy, irrespective of ideological com­ plexion. It is not surprising, therefore, that this volume is the third edited publication dedicated specifically to scholarship into rent-seeking behavior. The theory of rent-seeking bridges normative and positive analyses of state action. In its normative dimension, rent-seeking scholarship has expanded, enlivened, in some respects turned on its head, the traditional welfare analyses of such features of modern economics as monopoly, externalities, public goods, and trade protection devices. In its positive dimension, rent-seeking contributions have provided an important analy­ tical perspective from which to understand and to predict the behavior of politicians, interest groups and bureaucrats, the media and the academy within the political market place. This bridge between normative and positive elements of analysis is invaluable in facilitating an understanding of and evaluating the costs of state activity within a consistent paradigm.