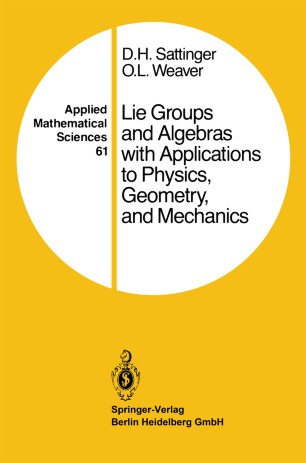 Lie Groups and Algebras with Applications to Physics, Geometry, and Mechanics

This book is intended as an introductory text on the subject of Lie groups and algebras and their role in various fields of mathematics and physics. It is written by and for researchers who are primarily analysts or physicists, not algebraists or geometers. Not that we have eschewed the algebraic and geo­ metric developments. But we wanted to present them in a concrete way and to show how the subject interacted with physics, geometry, and mechanics. These interactions are, of course, manifold; we have discussed many of them here-in particular, Riemannian geometry, elementary particle physics, sym­ metries of differential equations, completely integrable Hamiltonian systems, and spontaneous symmetry breaking. Much ofthe material we have treated is standard and widely available; but we have tried to steer a course between the descriptive approach such as found in Gilmore and Wybourne, and the abstract mathematical approach of Helgason or Jacobson. Gilmore and Wybourne address themselves to the physics community whereas Helgason and Jacobson address themselves to the mathematical community. This book is an attempt to synthesize the two points of view and address both audiences simultaneously. We wanted to present the subject in a way which is at once intuitive, geometric, applications­ oriented, mathematically rigorous, and accessible to students and researchers without an extensive background in physics, algebra, or geometry.