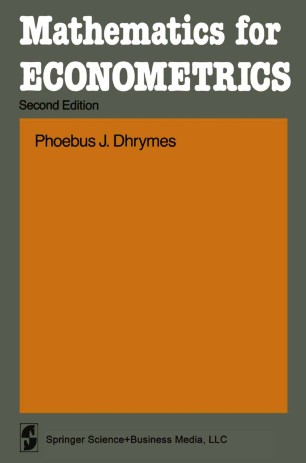 This booklet was begun as an appendix to Introductory Econometrics. As it progressed, requirements of consistency and completeness of coverage seemed to make it inordinately long to serve merely as an appendix, and thus it appears as a work in its own right. Its purpose is not to give rigorous instruction in mathematics. Rather it aims at filling the gaps in the typical student's mathematical training, to the extent relevant for the study of econometrics. Thus, it contains a collection of mathematical results employed at various stages of Introductory Econometrics. More generally, however, it would be a useful adjunct and reference to students of econometrics, no matter what text is being employed. In the vast majority of cases, proofs are provided and there is a modicum of verbal discussion of certain mathematical results, the objective being to reinforce the reader's understanding of the formalities. In certain instances, however, when proofs are too cumbersome, or complex, or when they are too obvious, they are omitted. Phoebus J. Dhrymes New York, New York May 1978 vii Preface to the Second Edition The reception accorded the publication of this booklet has encouraged me to consider preparing a second edition. The present version is essentially the original but adds a number of very useful results in terms of inverses and other features of partitioned matrices, a discussion of the singular value decomposition for rectangular matrices, issues of stability for the general linear structural econometric model, and similar topics.