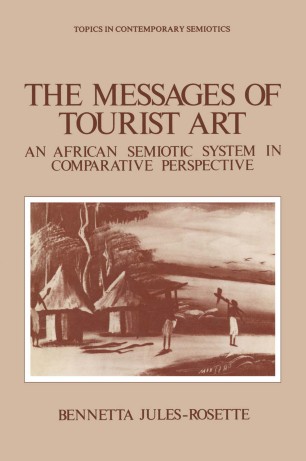 The Messages of Tourist Art

Tourist art may be a billion dollar business. Nevertheless, such art is despised. What is worse, the "bad" culture is seen as driving out the "good. " Commer­ cialization is assumed to destroy traditional arts and crafts, replacing them with junk. The process is seen as demeaning to artists in the traditional societies, who are seduced into a type of whoredom: unfeeling production of false beauty for money. The arts remain problematic for the social sciences. Sociology textbooks treat the arts as subordinate reflections of social forces, norms, or groups. An­ thropology textbooks conventionally isolate the arts in a separate chapter, failing to integrate them with analyses of kinship, economics, politics, language, or biology. Textbooks reflect the guiding theories, which emphasize such factors as modes of production, patterns of thought, or biological and normative con­ straints, but their authors have not adequately formulated the aesthetic dimen­ sion. One may compare the theoretical status of the arts to that of religion. After the contributions by Emile Durkheim and Max Weber, the sociology of religion is well established, but where is a Durkheim or Weber for the sociology of art? What is true of the social sciences in general holds for understanding of modernization in the Third World. These processes and those places are analyzed economically, politically, and socially, but the aesthetic dimension is treated in isolation, if at all, and is poorly grasped in relation to the other forces.