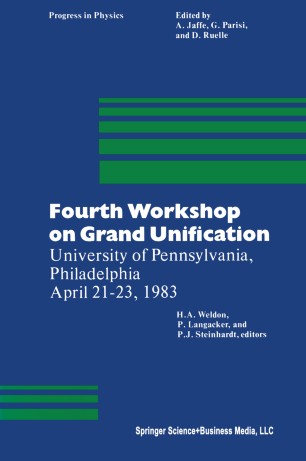 Part of the Progress in Physics book series (PMP, volume 9)

It has been sixteen years since the unification of electro­ Magnetism with the weak interactions was developed by Glashow, Salam, and Weinberg. Well before that proposal was fully confirmed by experiment, work began on unifying strong interactions with the electroweak. Now there is a growing effort to incorporate some theory of quantum gravity into the scheme. This enormous complex of theoreti­ cal and experimental efforts was the subject of the Fourth Workshop on Grand Unification held in Philadelphia and attended by over two hundred physicists. During the workshop, experimental and theoretical talks alternated as shown by the program summary on page 409. However, to display the logical scope of the workshop the proceedings are organized into five subject areas. Howard Georgi opened the workshop with a keynote address in which he reminds us of some of the simple properties of the particle spectrum that have not yet been understood. The first subject area, and also the largest, is proton decay and underground physics. This is introduced by ~Jill iam r1arciano' s review of the SU(5) predictions with particular attention paid to the theoretical uncertainties. Spokesmen for the major underground experiments present current results on proton decay, nn oscillations, and magnetic monopole flux: B. V. Sreekantan for the Kolar gold field experiment after 1. 9 years of operation, Earl Peterson for the Soudan detector after 0. 55 years, and Bruce Cortez for the rr'lB detector after 0. 22 years.