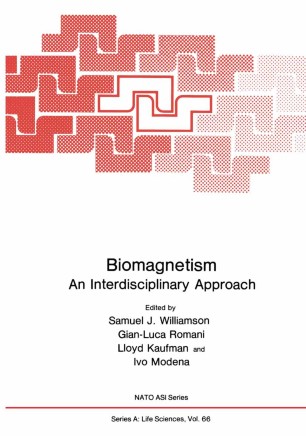 Biomagnetism is the study of magnetic fields that originate in biological systems. This is a relatively new discipline that has attracted considerable interest throughout the scientific commu- ty. The study of biomagnetic fields requires the use of techniques and concepts drawn from widely disparate scientific disciplines. To make these techniques and concepts available to a wide spectrum of the scientific community, a NATO Advanced study Institute on B- magnetism was held near Frascati at Grottaferrata, Italy, in S- tember 1982. This volume is based on the lectures delivered by scholars representing many different scientific areas, ranging from solid state physics to psychology. It attempts to preserve the - herent development of concepts drawn from physiology, psychology, biology, physics, medicine, occupational health and geology that was evident during the Institute. The reader will quickly become aware that the progress in biomagnetism over the past decade was due principally to the efforts of interdisciplinary teams of sci- tists. One of the purposes of this volume is to make all of the basic principles and findings of biomagnetism available in one place, so that scientists who have already embarked on the study of biomagnetism or who plan to do so in the near future will have them available for study and reference. Each section of this volume was written by a recognized expert who lectured at the Institute on the topics he describes here.