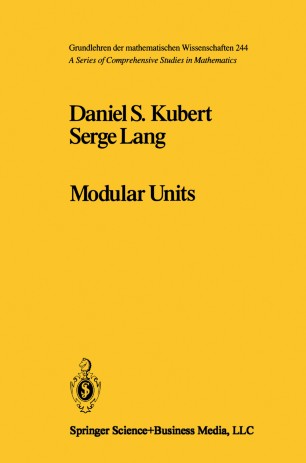 In the present book, we have put together the basic theory of the units and cuspidal divisor class group in the modular function fields, developed over the past few years. Let i) be the upper half plane, and N a positive integer. Let r(N) be the subgroup of SL (Z) consisting of those matrices == 1 mod N. Then r(N)\i) 2 is complex analytic isomorphic to an affine curve YeN), whose compactifi­ cation is called the modular curve X(N). The affine ring of regular functions on yeN) over C is the integral closure of C[j] in the function field of X(N) over C. Here j is the classical modular function. However, for arithmetic applications, one considers the curve as defined over the cyclotomic field Q(JlN) of N-th roots of unity, and one takes the integral closure either of Q[j] or Z[j], depending on how much arithmetic one wants to throw in. The units in these rings consist of those modular functions which have no zeros or poles in the upper half plane. The points of X(N) which lie at infinity, that is which do not correspond to points on the above affine set, are called the cusps, because of the way they look in a fundamental domain in the upper half plane. They generate a subgroup of the divisor class group, which turns out to be finite, and is called the cuspidal divisor class group.