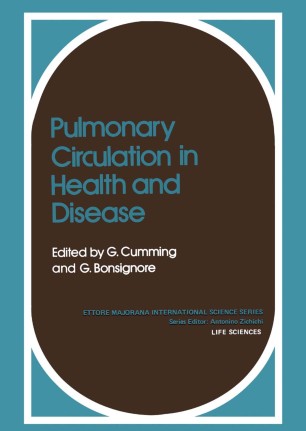 Pulmonary Circulation in Health and Disease

This volume documents the proceedings of a symposium on "The Pulmonary Circulation" held at the Ettore Majorana Center for Scientific Culture, in Erice, Sicily, between 16th July and 21st July 1979. This was attended by about 200 participants drawn from Europe as a whole, but the majority were from Southern Europe. The discussion was recorded either in English or Italian and the tapes were reduced to a verbatim typescript by the Ente Nazionale Interpeti Congresso. The verbatim typescript has been edited using a few guiding principles as foliows: Titles and honorifics have been eliminated unless the 1. statement is addressed to a specific person. The style of the speakers in the discussion has been 2. preserved as far as possible and not reduced to a strictly grammatical format. 3. Where references to illustrations (e.g., on the blackboard) are made, the comments have been left unaltered and many are understandable. Removing them detracted from the sense. 4. The air of informality in the proceedings has been preserved so far as possible. 5. The responsibility for the discussion rests solely with the editors, and no contributor has had the opportunity of correcting whae he said. No manuscript was received from one participant, but the 6. discussion of his presentation has been included since it contains some points of substance. G. Cumming and G. Bonsignore v CONTENTS Functional Morphology of the Pulmonary 1 Circulation. ........ .