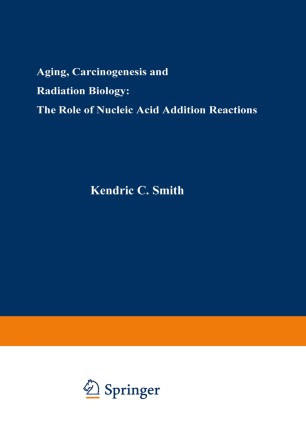 The covalent attachment to deoxyribonucleic acid in vivo of a large number of different types of chemical compounds (both normal cellular constituents such as proteins and amino acids, and also exogenous compounds such as drugs, carcinogens, etc. ) have been shown to exert profound effects upon cells. Four research activi­ ties, formerly considered to be totally independent, relate to this problem of nucleic acid adducts--(1) normal covalent attachment of DNA to membranes, protein linkers in chromosomes, etc. ; (2) the roles of radiation and chemical enhancement of DNA adduct formation in cell killing and mutagenesis. (A related field is the use of known cross-linking reactions to gain information on structural associations in macromolecular complexes. ); (3) the relevance of DNA adducts to chemical and radiation carcinogenesis; (4) the rele­ vance of DNA adducts to the cross-linking theory of cellular aging. (1) There are numerous examples of normal linkages between DNA and protein, e. g. , DNA-membrane attachment sites, protein linkers in chromosomes, amino acids covalently linked to DNA as a function of growth conditions, and gene regulation by non-covalently bound proteins. A summary of data on natural adducts to DNA thus serves to introduce the subject of the radiation and chemical enhancement of DNA adduct formation. (2) In the past, radiation biology has been concerned mainly with trying to understand the radiation chemistry of purified DNA, and the biological effects and repair of these radiation-induced alterations when produced in cellular DNA.