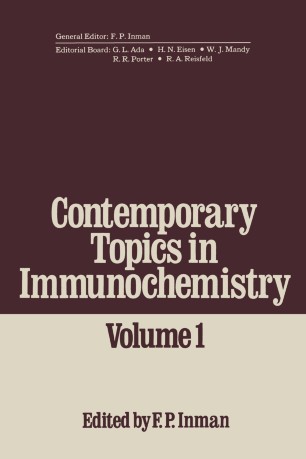 In 1897, Ehrlich suggested that natural preformed receptors from the surface of cells provided immunity to various chemical substances. Many years later, in 1940, Pauling proffered the concept that antibodies comprised a single poly­ peptide chain and that each end of the protein could form an antigen-binding site. Burnet tried to explain the diversity of antibody specificity by hypothesizing that it was cell-derived. These hypotheses probably have led to as much or more experimentation and discussion than any other of the many conjectures set forth to explain immunity on a molecular and cellular basis. Extensive investigations, initially stimulated by these propositions, proved Pauling's notion incorrect. In its demise, however, the multichain structure of the immunoglobulins was realized. In retrospect it be comes obvious that Ehrlich's idea, though not correct, was borne of amazing logic and cognition. Expansion of Burnet's theory seems to be occurring presently; much excitement is engendered by the finding of cell-bound immunoglobulin receptors. Ouring the preceding dozen years, immunochemists have accumulated enormous quantities of data. Though there is so much yet to be done, as a result of this research one may now discuss antigen-binding sites in relation to the protein's primary structure. There is even considerable understanding of the cellular assembly of some immunoglobulins. Entire books can be written about the chemistry of antigens and of complement.