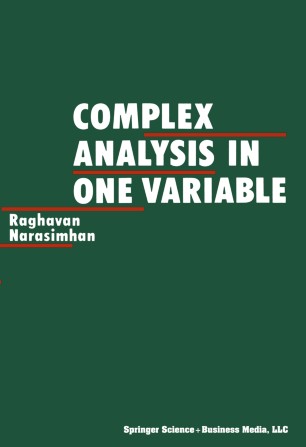 Complex Analysis in one Variable

This book is based on a first-year graduate course I gave three times at the University of Chicago. As it was addressed to graduate students who intended to specialize in mathematics, I tried to put the classical theory of functions of a complex variable in context, presenting proofs and points of view which relate the subject to other branches of mathematics. Complex analysis in one variable is ideally suited to this attempt. Of course, the branches of mathema­ tics one chooses, and the connections one makes, must depend on personal taste and knowledge. My own leaning towards several complex variables will be apparent, especially in the notes at the end of the different chapters. The first three chapters deal largely with classical material which is avai­ lable in the many books on the subject. I have tried to present this material as efficiently as I could, and, even here, to show the relationship with other branches of mathematics. Chapter 4 contains a proof of Picard's theorem; the method of proof I have chosen has far-reaching generalizations in several complex variables and in differential geometry. The next two chapters deal with the Runge approximation theorem and its many applications. The presentation here has been strongly influenced by work on several complex variables.