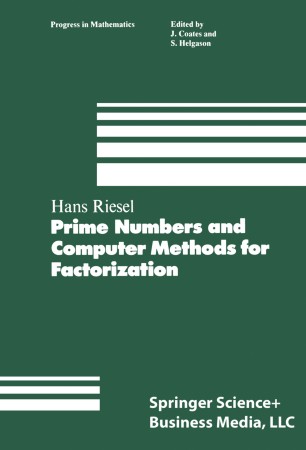 Part of the Progress in Mathematics book series (PM, volume 57)

In this book the author treats four fundamental and apparently simple problems. They are: the number of primes below a given limit, the ap­ proximate number of primes, the recognition of prime numbers and the factorization of large numbers. A chapter on the details of the distribution of the primes is included as well as a short description of a recent applica­ tion of prime numbers, the so-called RSA public-key cryptosystem. The author is also giving explicit algorithms and computer programs. Whilst not claiming completeness, the author has tried to give all important results known, including the latest discoveries. The use of computers has in this area promoted a development which has enormously enlarged the wealth of results known and that has made many older works and tables obsolete. As is often the case in number theory, the problems posed are easy to understand but the solutions are theoretically advanced. Since this text is aimed at the mathematically inclined layman, as well as at the more advanced student, not all of the proofs of the results given in this book are shown. Bibliographical references in these cases serve those readers who wish to probe deeper. References to recent original works are also given for those who wish to pursue some topic further. Since number theory is seldom taught in basic mathematics courses, the author has appended six sections containing all the algebra and number theory required for the main body of the book.