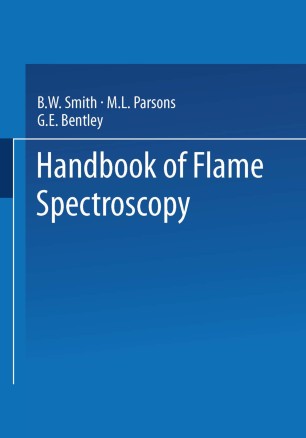 Analytical flame spectroscopy is a rich and growing disci­ pline, rooted in the broad fields of physics and chemistry. Its applications abound not only in these large areas, but also thrive in the geosciences, materials science, and clinical and biochemical analysis. As an inevitable corollary of the field's growth, the scientist seeking to develop a fluent expertise has been forced to assimilate and master a rapidly increasing quantity of information. Our guiding hope in creating the present work has therefore been to provide the investigator with a single reference source for nearly all the material ever likely to be required in the daily conduct of basic or applied research. Flame spectroscopy is not a new analytical field. It has seen at least three major eras, in each of which much new information was developed - the Bunsen-Kirchhoff years, the Beckman D. U. years, and finally the atomic absorption years. In the Bunsen-Kirchhoff era, several new elements were discovered. During the Beckman years - nearly all the early flame emission data were taken on modified Beckman D. U. spectrometers - trace metal analysis for the alkaline metals and for many alkaline earth elements reached a new high (low?) - the parts per million level. More recently, trace metal analysis has in general achieved a new maturity with the advent of atomic absorption analysis, which was co-discovered by C. Th. J. Alkemade and Alan Walsh in 1955.