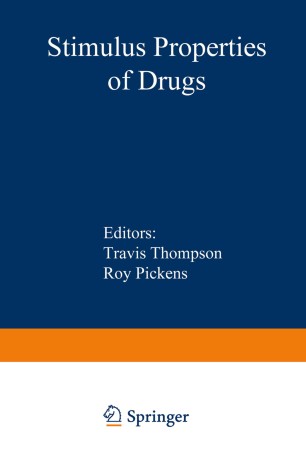 Behavioral pharmacology represents a relatively recent scientific enterprise, the development of which can be followed by plotting the publication of major conceptual papers, review articles, and books. Dews (1955), Sidman (1955), and Brady (1956) published some of the first methodologically significant papers, changing the way both psychologists and pharmacologists viewed the analysis of the behavioral actions of drugs. Dews and Morse (1961), Cook and Kelleher (1963), Gollub and Brady (1965), and Weiss and Laties (1969) kept the field abreast of major developments in the study of behavioral mechanisms of drug action. In 1968, the first textbook in the field was published (Thompson and Schuster), followed by a book of readings covering the preceding 15 years of the field (Thompson, Pickens, and Meisch, 1970). The first attempt to outline a set of generalizations concerning behavioral mechanisms of drug actions was puhlished in 1968 by Kelleher and Morse. As behavioral pharmacology developed, it became clear that demonstrations that drugs affect hehavior were relatively uninteresting. It was the mechanisms by which these effects are hrought about that was of concern. While other aspects of pharmacology have been concerned with biochemical, physiological, and in some cases biophysical accounts of drug actions, behavioral pharmacology has dealt with behavioral mechanisms . . . that is, "any verifiable description of a drug's effects which can he shown to uniquely covary with a specific measured 'response'. Generally, this relation can be subsumed under some more general set of relations or principles" (Thompson, Pickens, and Meisch, 1970, p. I).