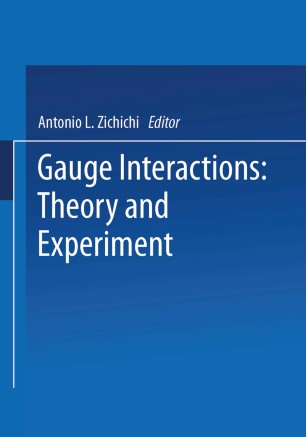 Part of the The Subnuclear Series book series (SUS, volume 20)

In August 1982 a group of 104 physicists from 70 laboratories of 31 countries met in Erice to attend the 20th Course of the Inter­ national School of Subnuclear Physics. The countries represented at the School were: Argentina, Australia, Austria, Belgium, Brazil, Bulgaria, Canada, Chile, China, Czechoslovakia, France, the Federal Republic of Germany, Greece, India, Iran, Israel, Italy, Japan, Morocco, the Netherlands, Norway, Poland, South Africa, Spain, Sweden, Switzerland, Turkey, the United Kingdom, the United States of America, Yugoslavia, and Zimbabwe. The School was sponsored by the Italian Ministry of Public Education (MPI), the Italian Ministry of Scientific and Techno-­ logical Research (MRSI), the Sicilian Regional Government, and the Weizmann Institute of Science. This year, on the occasion of the 60th birthday of Chen Ning Yang, the "Ettore Majorana" Centre decided to pay tribute to the outstanding scientific achievements of one of the most prominent scientists of our time, by dedicating the 20th Course of the International School of Subnuclear Physics to a review of the pre­ sent status of one of the fields of physics where Chen Ning Yang has contributed most profoundly: gauge interactions. The theo­ retical foundations and the most recent developments were presented by Chen Ning Yang. The most general consequences of a gauge inter­ action -- supersymmetry -- with its theoretical aspects and the experimental implications were discussed by Sergio Ferrara and Demetrios Nanopoulos.