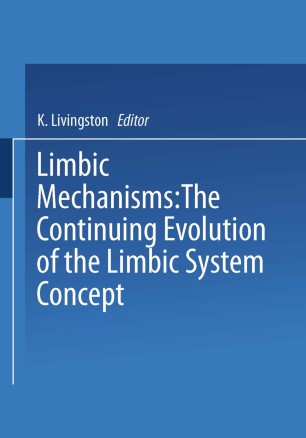 The Continuing Evolution of the Limbic System Concept

This volume records the proceedings of a Limbic System Sympos­ ium held at the University of Toronto, November 5-6th, 1976 as a satellite event to the Sixth Annual Meeting of the Society of Neuroscience. The Symposium was designed in part as a tribute to James Papez on the 40th anniversary of the publication of his epochal paper "A Proposed Mechanism of Emotion". Papers by MacLean, Yakovlev, and Angevine provide personal recollections of Papez and an assessment of the significant contri­ bution he made to breaking down the still formidable barriers that separate our concepts of brain, mind, emotion, and behavior. Against this background subsequent speakers presented new information that further illuminates the anatomical, physiological and biochemical mechanisms underlying limbic system function. Viewed in juxtaposition this new information from "disparate" fields of neuroscience provides an increasingly coherent picture of the neuronal organization subserving a dynamic limbic system that we can now begin to visualize in operational and transactional terms. The final section of the symposium focusses on the recently identified "kindling" phenomenon which is viewed as a general model of neural plasticity and more particularly as a model of experi­ mentally induced limbic system dysfunction. Using this model it is possible to display, analyse, and experimentally manipulate long lasting changes in limbic system activity, which develop over ex­ tended periods of time and are expressed in a variety of behavioral end points involving learning and memory, seizure activity, and changes in emotionality and behavior.