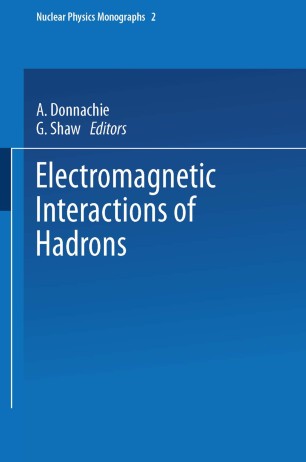 While electromagnetic interactions were first used to probe the structure of elementary particles more than 20 years ago, their importance has only become fully evident in the last 10 years. In the resonance region, photo­ production experiments have provided clear evidence for simple quark model ideas, and confirmed the Melosh-transformed SU(6)w as a relevant symmetry classification. At higher energies, their most striking feature is their similarity to hadron-induced reactions, and they have provided fresh insight into the ideas developed to explain strong-interaction physics. New dimensions are added by taking the photon off mass shell, both in the spacelike region, where the development of high-energy electron and muon beams has led to the discovery and study of scaling and the intro­ duction of "partons," and even more dramatically in the timelike region, where the development of high-energy electron-positron storage rings has led to the exciting discoveries of the last four years. In view of the immense interest stimulated by these developments, an extensive review of our present state of knowledge is both timely and useful. Because of the very wide range of the subject, a cooperative venture presents itself as the most suitable format and is the one we have adopted here. The emphasis throughout is primarily, but not entirely, on phenomenology, concentrating on describing the main features of the experimental data and on the theoretical ideas used directly in their inter­ pretation.