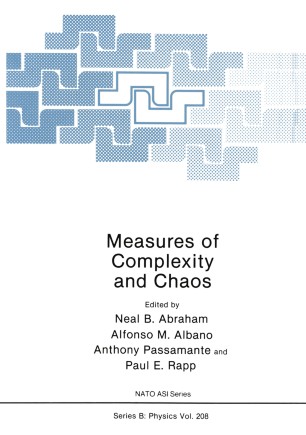 Measures of Complexity and Chaos

This volume serves as a general introduction to the state of the art of quantitatively characterizing chaotic and turbulent behavior. It is the outgrowth of an international workshop on "Quantitative Measures of Dynamical Complexity and Chaos" held at Bryn Mawr College, June 22-24, 1989. The workshop was co-sponsored by the Naval Air Development Center in Warminster, PA and by the NATO Scientific Affairs Programme through its special program on Chaos and Complexity. Meetings on this subject have occurred regularly since the NATO workshop held in June 1983 at Haverford College only two kilometers distant from the site of this latest in the series. At that first meeting, organized by J. Gollub and H. Swinney, quantitative tests for nonlinear dynamics and chaotic behavior were debated and promoted [1). In the six years since, the methods for dimension, entropy and Lyapunov exponent calculations have been applied in many disciplines and the procedures have been refined. Since then it has been necessary to demonstrate quantitatively that a signal is chaotic rather than it being acceptable to observe that "it looks chaotic". Other related meetings have included the Pecos River Ranch meeting in September 1985 of G. Mayer­ Kress [2) and the reflective and forward looking gathering near Jerusalem organized by M. Shapiro and I. Procaccia in December 1986 [3). This meeting was proof that interest in measuring chaotic and turbulent signals is widespread.