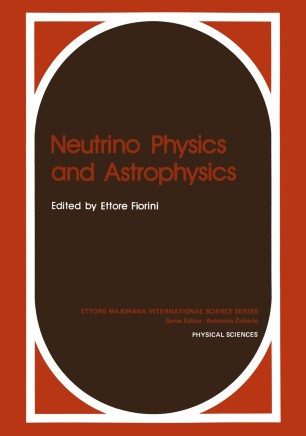 Neutrino '80 held at the Ettore Majorana Center for Scientific Culture in Erice, was the tenth of a series of International Confer­ ences on Neutrino Physics and Astrophysics. It also marked the fiftieth anniversary of the first mention, by Wolfgang Pauli, of a neutral particle emitted in beta decay. The conference occurred at a very propitious time in neutrino physics: the possibility of a non-zero neutrino mass and of neutrino oscillations has obvious implications of great importance in neutrino astrophysics and cosmology, as well as in the grand unified theories. In order to encourage contacts and discussions among the various experts in different branches of neutrino physics and astrophysics, the conference was based only on plenary sessions, and mainly on review talks. Short communications were accepted only if they bore new and unexpected results which could not be covered in the appro­ priate review. I would like to thank the participants for their understanding of this often unpopular rule. I take this opportunity to express my gratitude to the members of the International Advisory Committee, to George Marx, Secretary of the on-going International Neutrino Committee, to the rapporteurs and session chairmen. Thanks are especially due to Antonino Zichichi, Director of the Ettore Majorana Centre for Scientific Culture, for the warm and generous hospitality extended to us, and to Alberto Gabriele and Pinola Savalli for their untiring efforts to make our stay in Erice as enjoyable as fruitful.