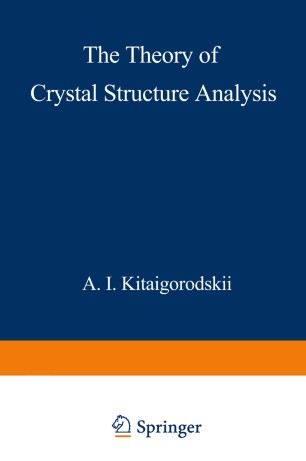 The Theory of Crystal Structure Analysis

Structure analysis is based on the phenomena of the diffraction of radia­ tion by materials. In the first ten to twenty years after Laue's discovery, a very complete theory was developed for the diffraction of x-rays and, later, of electrons. This theory led to equations by means of which it was possible to compute the intensity pattern for a given structure. The theory of structure analysis came to mean that of the diffraction of radiation. In 1935, Patterson pointed out a way leading to the solution of the inverse problem: the finding of the structure from a given intensity distribution pattern. At first the conservatism of researchers, and then the war, hampered the de­ velopment and broad application of the ideas set forth in this work. It was only during the last ten years that all the rich possibilities of the Patterson method - the method of the analysis of the convolution of the electron density - were brought to light and applied in practice.