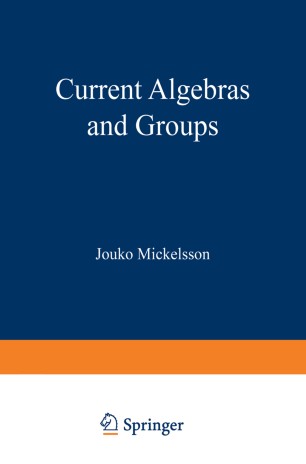 Let M be a smooth manifold and G a Lie group. In this book we shall study infinite-dimensional Lie algebras associated both to the group Map(M, G) of smooth mappings from M to G and to the group of dif­ feomorphisms of M. In the former case the Lie algebra of the group is the algebra Mg of smooth mappings from M to the Lie algebra gof G. In the latter case the Lie algebra is the algebra Vect M of smooth vector fields on M. However, it turns out that in many applications to field theory and statistical physics one must deal with certain extensions of the above mentioned Lie algebras. In the simplest case M is the unit circle SI, G is a simple finite­ dimensional Lie group and the central extension of Map( SI, g) is an affine Kac-Moody algebra. The highest weight theory of finite­ dimensional Lie algebras can be extended to the case of an affine Lie algebra. The important point is that Map(Sl, g) can be split to positive and negative Fourier modes and the finite-dimensional piece g corre­ sponding to the zero mode.