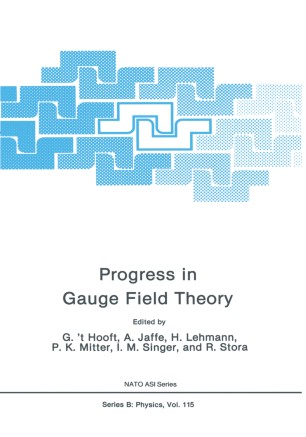 The importance of gauge theory for elementary particle physics is by now firmly established. Recent experiments have yielded convincing evidence for the existence of intermediate bosons, the carriers of the electroweak gauge force, as well as for the presence of gluons, the carriers of the strong gauge force, in hadronic inter­actions. For the gauge theory of strong interactions, however, a number of important theoretical problems remain to be definitely resolved. They include the quark confinement problem, the quantita­tive study of the hadron mass spectrum as well as the role of topology in quantum gauge field theory. These problems require for their solution the development and application of non-perturbative methods in quantum gauge field theory. These problems, and their non-perturbative analysis, formed the central interest of the 1983 Cargese summer institute on "Progress in Gauge Field Theory. " In this sense it was a natural sequel to the 1919 Cargese summer institute on "Recent Developments in Gauge Theories. " Lattice gauge theory provides a systematic framework for the investigation of non-perturbative quantum effects. Accordingly, a large number of lectures dealt with lattice gauge theory. Following a systematic introduction to the subject, the renormalization group method was developed both as a rigorous tool for fundamental questions, and in the block-spin formulation, the computations by Monte Carlo programs. A detailed analysis was presented of the problems encountered in computer simulations. Results obtained by this method on the mass spectrum were reviewed.