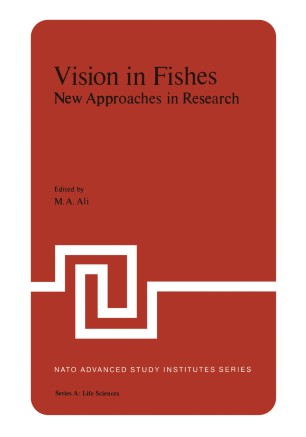 No more than a fish loves water. - Is not this a strange fellow, my lord, that so confidently seems to undertake this business, which he knows is not to be done; damns himself to do, and dares better be damn'd than to dolt? All's Well That Ends Well Act III, Sc. 6 This volume is the direct result of a NATO-Advanced Study Institute of the same title. held at Bishop's University, Lennoxville, Quebec, Canada, August 1974, under the joint sponsor­ ship of the NATO-Scientific Advisory Committee, National Research Council of Canada and the Universite de Montreal. It is not, however, strictly restricted to the lectures and seminars pre­ sented at the ASI. Contributions have been included from two workers who found at a fairly late stage that they could not attend and also included are a table giving the visual pigments and an­ other dealing with the distribution and development of retinomotor responses. I encouraged the authors to prepare speculative reviews highlighting their own research or that of their immediate col­ leagues and a number of them have done so. Several contributors, notably those who were asked to give lectures of a general nature at the ASI have written reviews of somewhat greater scope. The result is a collection of papers representing a great variety of approaches to the study of vision in fishes.