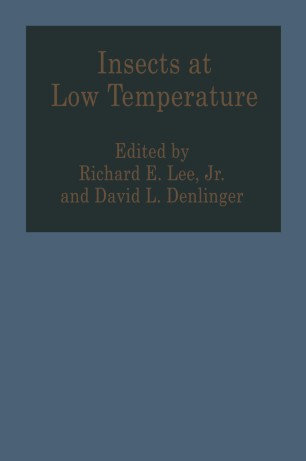 The study of insects at low temperature is a comparatively new field. Only recently has insect cryobiology begun to mature, as research moves from a descriptive approach to a search for underlying mechanisms at diverse levels of organization ranging from the gene and cell to ecological and evolutionary relationships. Knowledge of insect responses to low temperature is crucial for understanding the biology of insects living in seasonally varying habitats as well as in polar regions. It is not possible to precisely define low temperature. In the tropics exposure to 10-15°C may induce chill coma or death, whereas some insects in temperate and polar regions remain active and indeed even able to fly at O°C or below. In contrast, for persons interested in cryopreservation, low temperature may mean storage in liquid nitrogen at - 196°C. In the last decade, interest in adaptations of invertebrates to low temperature has risen steadily. In part, this book had its origins in a symposium on this subject that was held at the annual meeting of the Entomological Society of America in Louisville, Kentucky, USA in December, 1988. However, the emergence and growth of this area has also been strongly influenced by an informal group of investigators who met in a series of symposia held in Oslo, Norway in 1982, in Victoria, British Columbia, Canada in 1985 and in Cambridge, England in 1988. Another is scheduled for Binghamton, New York, USA (1990).