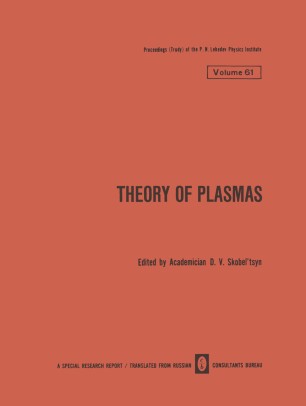 This volume contains two papers that review certain theoretical problems that have been studied in the Laboratory of Plasma Accelerators and Plasma Physics of the P. N. Lebedev Physics Institute of the Academy of Sciences of the USSR. The review of R. R. Kikvidze and A. A. Rukhadze, "Theory of oscillations and stability of a semiconductor plasma with low carrier density in a strong electric field," is devoted to a solid-state plasma. The main attention is devoted to the fact that in such a plasma electro­ magnetic waves are effectively generated if there is a negative current-voltage characteristic in the carrier current; this effect can compete in importance with the well-known Gunn effect. In their fundamental review paper "Nonlinear theory of the interaction of waves in a plasma," V. V. Pustovalov and V. P. SHin set forth the fundamentals of the theory of nonlinear interaction of waves in a hot rarefied plasma. Besides a systematic exposition of the pro­ cedure for deriving the equations that describe the nonlinear interaction of waves in an iso­ tropic or an anisotropic (magnetized) plasma, they study many concrete examples relating to the interaction of definite types of waves under different conditions.