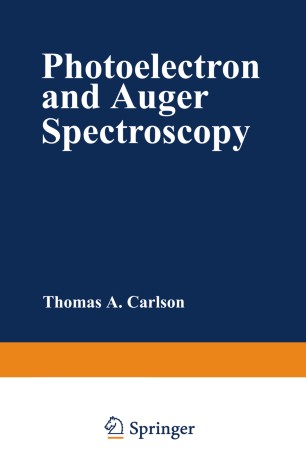 In 1970 when I first seriously contemplated writing a book on electron spectroscopy, I recognized the impossibility of completely reaching my desired goals. First, the field was expanding (and still is) at such a rate that a definitive statement of the subject is not possible. The act of following the literature comprehensively and summarizing its essential content proved to be a diver­ gent series. On the other hand, the field has increased to such a size that violent changes in its basic makeup no longer occur with the frequency that was present in its early days. Furthermore, the excitement of electron spectro­ scopy lies in its many-faceted interrelationships. In the era of specialization, electron spectroscopy is an open-ended subject continually bringing together new aspects of science. I wished to discuss not just one type of electron spectro­ scopy, but as many as would be possible. The book as it stands concentrates its attention on x-ray photoelectron spectroscopy, but also presents the basis of Auger electron spectroscopy and uv photoelectron spectroscopy, as well as mentioning many of the other branches of the field. A large, many-author volume might be an answer to some of these problems. However, though anyone person possesses only a limited amount of expertise, I have always enjoyed books by a single author since what they lack in detailed knowledge they gain in a unified viewpoint. I hope the final product, though limited in its attainment of these goals, will still be of some merit.