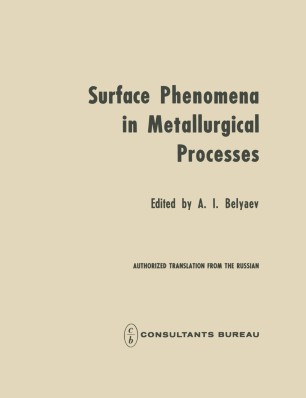 Proceedings of an Interinstitute Conference

Surface phenomena in the field of high-temperature processes are attracting ever increasing attention on the part of scientific workers and engineers. In this field, many questions of applied science cannot properly be solved without taking into account the characteristics caused by surface phenomena at the various interfaces. The importance of surface phenomena in the pyrometallurgy of nonferrous and ferrous metals was convincingly demonstrated at a scientific conference on this problem held in Moscow towards the end of 1961. The English translation of the transactions of this conference, "Surface Phenomena in Metallurgical Processes, .. and its publication in the USA will ena ble American scientists and engineers working in the field of surface phenomena and metallurgy to acquaint themselves with the work of Russian investigators in this inter­ esting field of physical chemistry and the theory of metallurgical processes. In the Soviet Union, important groups of scientists in Moscow, Leningrad, Kiev, Sverdlovsk. and other cities are engaged in the study of surface phenomena as applied to the different branches of metallurgy. We trust that the publication of the American edition of the book "Surface Phenomena in Metallurgical Processes" will help to strengthen the scientific bonds between Soviet and American scientists.