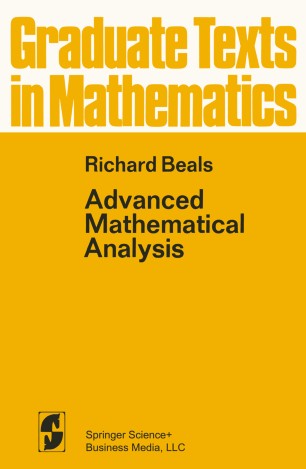 Once upon a time students of mathematics and students of science or engineering took the same courses in mathematical analysis beyond calculus. Now it is common to separate" advanced mathematics for science and engi­ neering" from what might be called "advanced mathematical analysis for mathematicians." It seems to me both useful and timely to attempt a reconciliation. The separation between kinds of courses has unhealthy effects. Mathe­ matics students reverse the historical development of analysis, learning the unifying abstractions first and the examples later (if ever). Science students learn the examples as taught generations ago, missing modern insights. A choice between encountering Fourier series as a minor instance of the repre­ sentation theory of Banach algebras, and encountering Fourier series in isolation and developed in an ad hoc manner, is no choice at all. It is easy to recognize these problems, but less easy to counter the legiti­ mate pressures which have led to a separation. Modern mathematics has broadened our perspectives by abstraction and bold generalization, while developing techniques which can treat classical theories in a definitive way. On the other hand, the applier of mathematics has continued to need a variety of definite tools and has not had the time to acquire the broadest and most definitive grasp-to learn necessary and sufficient conditions when simple sufficient conditions will serve, or to learn the general framework encompass­ ing different examples.