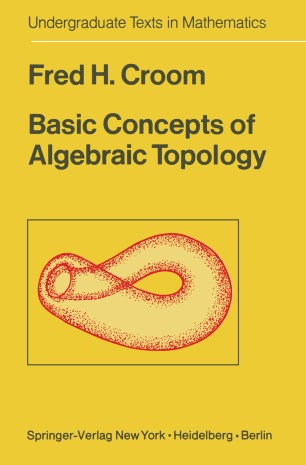 This text is intended as a one semester introduction to algebraic topology at the undergraduate and beginning graduate levels. Basically, it covers simplicial homology theory, the fundamental group, covering spaces, the higher homotopy groups and introductory singular homology theory. The text follows a broad historical outline and uses the proofs of the discoverers of the important theorems when this is consistent with the elementary level of the course. This method of presentation is intended to reduce the abstract nature of algebraic topology to a level that is palatable for the beginning student and to provide motivation and cohesion that are often lacking in abstact treatments. The text emphasizes the geometric approach to algebraic topology and attempts to show the importance of topological concepts by applying them to problems of geometry and analysis. The prerequisites for this course are calculus at the sophomore level, a one semester introduction to the theory of groups, a one semester introduc­ tion to point-set topology and some familiarity with vector spaces. Outlines of the prerequisite material can be found in the appendices at the end of the text. It is suggested that the reader not spend time initially working on the appendices, but rather that he read from the beginning of the text, referring to the appendices as his memory needs refreshing. The text is designed for use by college juniors of normal intelligence and does not require "mathematical maturity" beyond the junior level.