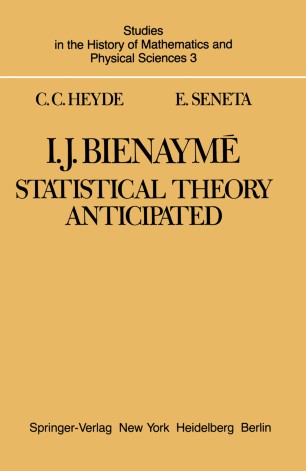 Part of the Studies in the History of Mathematics and Physical Sciences book series (HISTORY, volume 3)

Our interest in 1. J. Bienayme was kindled by the discovery of his paper of 1845 on simple branching processes as a model for extinction of family names. In this work he announced the key criticality theorem 28 years before it was rediscovered in incomplete form by Galton and Watson (after whom the process was subsequently and erroneously named). Bienayme was not an obscure figure in his time and he achieved a position of some eminence both as a civil servant and as an Academician. However, his is no longer widely known. There has been some recognition of his name work on least squares, and a gradually fading attribution in connection with the (Bienayme-) Chebyshev inequality, but little more. In fact, he made substantial contributions to most of the significant problems of probability and statistics which were of contemporary interest, and interacted with the major figures of the period. We have, over a period of years, collected his traceable scientific work and many interesting features have come to light. The present monograph has resulted from an attempt to describe his work in its historical context. Earlier progress reports have appeared in Heyde and Seneta (1972, to be reprinted in Studies in the History of Probability and Statistics, Volume 2, Griffin, London; 1975; 1976).