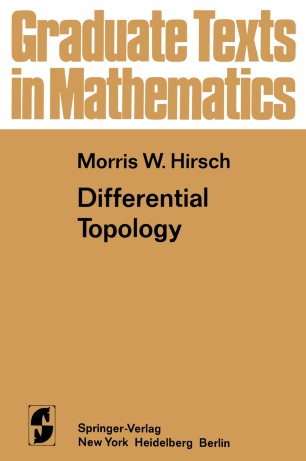 This book presents some of the basic topological ideas used in studying differentiable manifolds and maps. Mathematical prerequisites have been kept to a minimum; the standard course in analysis and general topology is adequate preparation. An appendix briefly summarizes some of the back­ ground material. In order to emphasize the geometrical and intuitive aspects of differen­ tial topology, I have avoided the use of algebraic topology, except in a few isolated places that can easily be skipped. For the same reason I make no use of differential forms or tensors. In my view, advanced algebraic techniques like homology theory are better understood after one has seen several examples of how the raw material of geometry and analysis is distilled down to numerical invariants, such as those developed in this book: the degree of a map, the Euler number of a vector bundle, the genus of a surface, the cobordism class of a manifold, and so forth. With these as motivating examples, the use of homology and homotopy theory in topology should seem quite natural. There are hundreds of exercises, ranging in difficulty from the routine to the unsolved. While these provide examples and further developments of the theory, they are only rarely relied on in the proofs of theorems.