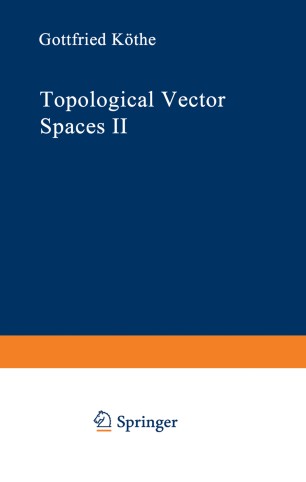 In the preface to Volume One I promised a second volume which would contain the theory of linear mappings and special classes of spaces im­ portant in analysis. It took me nearly twenty years to fulfill this promise, at least to some extent. To the six chapters of Volume One I added two new chapters, one on linear mappings and duality (Chapter Seven), the second on spaces of linear mappings (Chapter Eight). A glance at the Contents and the short introductions to the two new chapters will give a fair impression of the material included in this volume. I regret that I had to give up my intention to write a third chapter on nuclear spaces. It seemed impossible to include the recent deep results in this field without creating a great further delay. A substantial part of this book grew out of lectures I held at the Mathematics Department of the University of Maryland· during the academic years 1963-1964, 1967-1968, and 1971-1972. I would like to express my gratitude to my colleagues J. BRACE, S. GOLDBERG, J. HORVATH, and G. MALTESE for many stimulating and helpful discussions during these years. I am particularly indebted to H. JARCHOW (Ziirich) and D. KEIM (Frankfurt) for many suggestions and corrections. Both have read the whole manuscript. N. ADASCH (Frankfurt), V. EBERHARDT (Miinchen), H. MEISE (Diisseldorf), and R. HOLLSTEIN (Paderborn) helped with important observations.