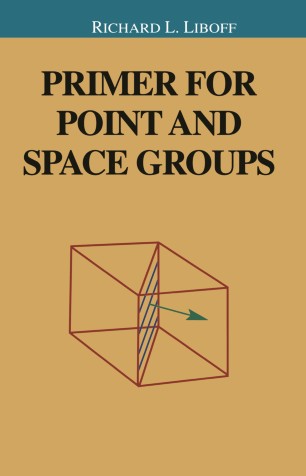 Primer for Point and Space Groups

This text stems from a course I have taught a number of times, attended by students of material science, electrical engineering, physics, chemistry, physical chemistry and applied mathematics. It is intended as an intro­ ductory discourse to give the reader a first encounter with group theory. The work concentrates on point and space groups as these groups have the principal application in technology. Here is an outline of the salient features of the chapters. In Chapter 1, basic notions and definitions are introduced including that of Abelian groups, cyclic groups, Sylow's theorems, Lagrange's subgroup theorem and the rearrangement theorem. In Chapter 2, the concepts of classes and direct products are discussed. Applications of point groups to the Platonic solids and non-regular dual polyhedra are described. In Chapter 3, matrix representation of operators are introduced leading to the notion of irreducible representations ('irreps'). The Great Orthogonal­ ity Theorem (GOT) is also introduced, followed by six important rules relating to dimensions of irreps. Schur's lemma and character tables are described. Applications to quantum mechanics are discussed in Chapter 4 including descriptions of the rotation groups in two and three dimensions, the symmetric group, Cayley's theorem and Young diagrams. The relation of degeneracy of a quantum state of a system to dimensions of irreps of the group of symmetries of the system are discussed, as well as the basis properties of related eigenfunctions.