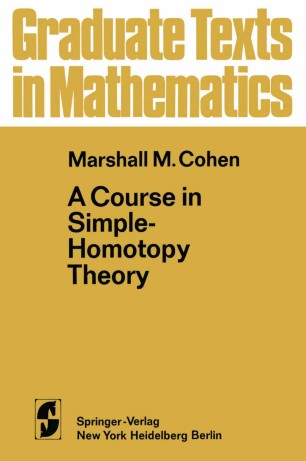 A Course in Simple-Homotopy Theory

This book grew out of courses which I taught at Cornell University and the University of Warwick during 1969 and 1970. I wrote it because of a strong belief that there should be readily available a semi-historical and geo­ metrically motivated exposition of J. H. C. Whitehead's beautiful theory of simple-homotopy types; that the best way to understand this theory is to know how and why it was built. This belief is buttressed by the fact that the major uses of, and advances in, the theory in recent times-for example, the s-cobordism theorem (discussed in §25), the use of the theory in surgery, its extension to non-compact complexes (discussed at the end of §6) and the proof of topological invariance (given in the Appendix)-have come from just such an understanding. A second reason for writing the book is pedagogical. This is an excellent subject for a topology student to "grow up" on. The interplay between geometry and algebra in topology, each enriching the other, is beautifully illustrated in simple-homotopy theory. The subject is accessible (as in the courses mentioned at the outset) to students who have had a good one­ semester course in algebraic topology. I have tried to write proofs which meet the needs of such students. (When a proof was omitted and left as an exercise, it was done with the welfare of the student in mind. He should do such exercises zealously.