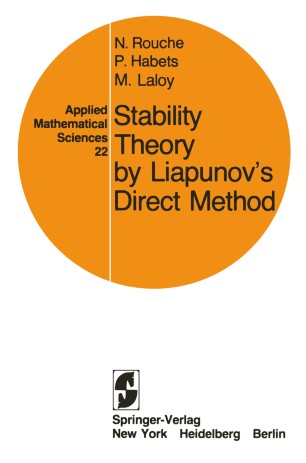 This monograph is a collective work. The names appear­ ing on the front cover are those of the people who worked on every chapter. But the contributions of others were also very important: C. Risito for Chapters I, II and IV, K. Peiffer for III, IV, VI, IX R. J. Ballieu for I and IX, Dang Chau Phien for VI and IX, J. L. Corne for VII and VIII. The idea of writing this book originated in a seminar held at the University of Louvain during the academic year 1971-72. Two years later, a first draft was completed. However, it was unsatisfactory mainly because it was ex­ ce~sively abstract and lacked examples. It was then decided to write it again, taking advantage of -some remarks of the students to whom it had been partly addressed. The actual text is this second version. The subject matter is stability theory in the general setting of ordinary differential equations using what is known as Liapunov's direct or second method. We concentrate our efforts on this method, not because we underrate those which appear more powerful in some circumstances, but because it is important enough, along with its modern developments, to justify the writing of an up-to-date monograph. Also excellent books exist concerning the other methods, as for example R. Bellman [1953] and W. A. Coppel [1965].