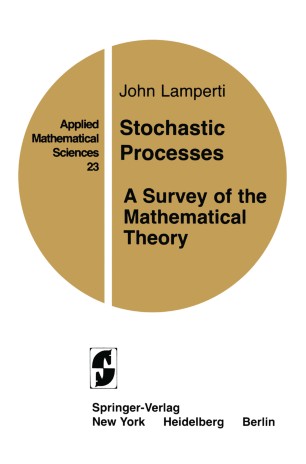 A Survey of the Mathematical Theory

This book is the result of lectures which I gave dur­ ing the academic year 1972-73 to third-year students a~ Aarhus University in Denmark. The purpose of the book, as of the lectures, is to survey some of the main themes in the modern theory of stochastic processes. In my previous book Probability: ! survey of the mathe­ matical theory I gave a short overview of "classical" proba­ bility mathematics, concentrating especially on sums of inde­ pendent random variables. I did not discuss specific appli­ cations of the theory; I did strive for a spirit friendly to application by coming to grips as fast as I could with the major problems and techniques and by avoiding too high levels of abstraction and completeness. At the same time, I tried to make the proofs both rigorous and motivated and to show how certain results have evolved rather than just presenting them in polished final form. The same remarks apply to this book, at least as a statement of intentions, and it can serve as a sequel to the earlier one continuing the story in the same style and spirit. The contents of the present book fall roughly into two parts. The first deals mostly with stationary processes, which provide the mathematics for describing phenomena in a steady state overall but subject to random fluctuations. Chapter 4 is the heart of this part.