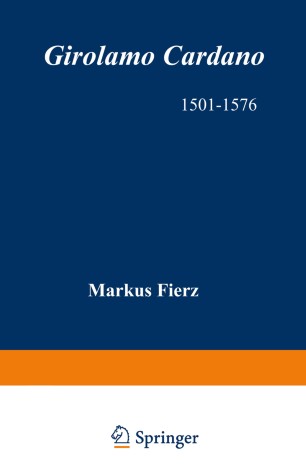 HIS STUDY OF GIROLAMO CARDANO is the T work of an amateur in the field of the history of science and the history of ideas. As a mathematical physi­ cist I lack the depth of training in philological-historical disciplines necessary to discuss the sources of Car­ dano's knowledge and trace the influences that shaped his views on science, medicine, and philosophy. What little recent literature on Cardano there is some­ times shows a lack of true understanding, or is primarily an appreciation of the mathematician. I relied, therefore, largely on his own writings, which are collected in the Opera Omnia. My excerpts and translations are taken di­ rectly from these works, and I hope that I have succeeded in capturing their essential meaning and spirit. MARKUS FIERZ Preface to the English Edition THANK the publisher Birkhauser Boston, Incorpo­ I rated, for the venture of this English edition of my essay on Cardano that originally appeared in the Poly Series published by Birkhauser Verlag, and for the care given to the translation. For this edition I have added two longer sections: one on Cardano's voyage to Scotland, and another on a rather interesting "mathematical theosophy" contained in his Liber de Proportionibus (Basel, 1570). Also included is a list of references quoted in the notes, and a record-as complete as possible-of the original editions of Cardano' s writings.