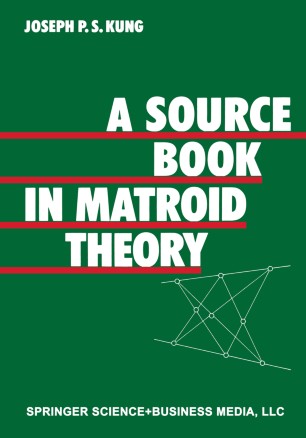 A Source Book in Matroid Theory

by Gian-Carlo Rota The subjects of mathematics, like the subjects of mankind, have finite lifespans, which the historian will record as he freezes history at one instant of time. There are the old subjects, loaded with distinctions and honors. As their problems are solved away and the applications reaped by engineers and other moneymen, ponderous treatises gather dust in library basements, awaiting the day when a generation as yet unborn will rediscover the lost paradise in awe. Then there are the middle-aged subjects. You can tell which they are by roaming the halls of Ivy League universities or the Institute for Advanced Studies. Their high priests haughtily refuse fabulous offers from eager provin­ cial universities while receiving special permission from the President of France to lecture in English at the College de France. Little do they know that the load of technicalities is already critical, about to crack and submerge their theorems in the dust of oblivion that once enveloped the dinosaurs. Finally, there are the young subjects-combinatorics, for instance. Wild­ eyed individuals gingerly pick from a mountain of intractable problems, chil­ dishly babbling the first words of what will soon be a new language. Child­ hood will end with the first Seminaire Bourbaki. It could be impossible to find a more fitting example than matroid theory of a subject now in its infancy. The telltale signs, for an unfailing diagnosis, are the abundance of deep theorems, going together with a paucity of theories.