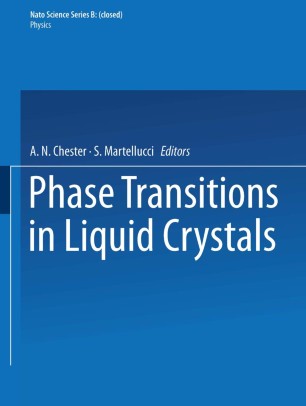 The Nato Advanced Study Institute "Phase Transitions in Liquid Crystals" was held May 2-12, 1991, in Erice, Sicily. This was the 16th conference organized by the International School of Quantum Electronics, under the auspices of the "Ettore Majorana" Centre for Scientific Culture. The subject of "Liquid Crystals" has made amazing progress since the last ISQE Course on this subject in 1985. The present Proceedings give a tutorial introduction to today's most important areas, as well as a review of current results by leading researchers. We have brought together some of the world's acknowledged experts in the field to summarize both the present state of their research and its background. Most of the lecturers attended all the lectures and devoted their spare hours to stimulating discussions. We would like to thank them all for their admirable contributions. The Institute also took advantage of a very active audience; most of the students were active researchers in the field and contributed with discussions and seminars. Some of these student seminars are also included in these Proceedings. We did not modify the original manuscripts in editing this book, but we did group them according to the following topics: 1) "Theoretical Foundations"; 2) "Thermotropic Liquid Crystals"; 3) "Ferroelectric Liquid Crystals"; 4) "Polymeric Liquid Crystals"; and 5) "Lyotropic Liquid Crystals".