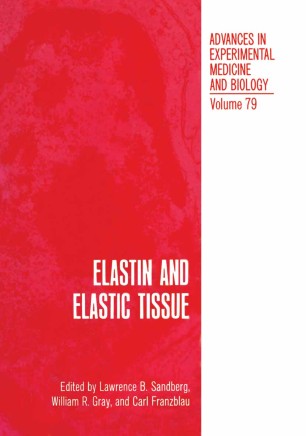 Part of the Advances in Experimental Medicine and Biology book series (AEMB, volume 79)

Although elastin was first identified and purifled in 1840, relatively few, major advances to determine its structure and function occurred between then and 1970. This was pointed out by Carl Franzblau in his recent review (1). This sad state of affairs does not detract, however, from the importance of contributions made during the last 50 years; many of these are referred to in the various chapters that comprise this monograph. I would be remiss not to emphasize the pioneering work of S. M. Partridge, who, in 1955, reported on a technique to obtain virtually pure elastin. It was, indeed, a privilege to have the participation of Dr. Partridge in the First International Conference on Elastin, the proceedings of which constitute this volume. In 1974, the Division of Lung Diseases of the National Heart, Lung, and Blood Institute initiated a targeted research program on "Isolation and Purification of Lung Elastin". It was an asset to the program that it attracted eminent scientists who, in effect, stimulated a new wave of interest and activity in this neglected area of research. This resurgence of interest may have been due to the challenge of working with a tissue that presented difficulties which had in the past discour­ aged investigators. It soon became apparent that the research program initiated by the Division of Lung Diseases was attracting much interest and that many significant contributions would result from it.