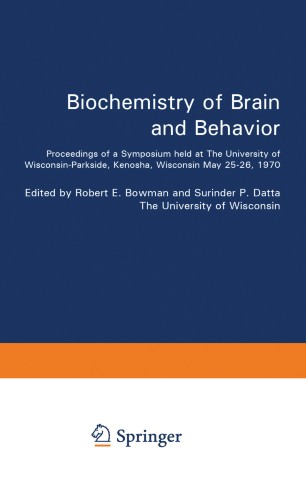 Biochemistry of Brain and Behavior

Proceedings of a Symposium held at The University of Wisconsin-Parkside, Kenosha, Wisconsin May 25–26, 1970

ment of mental retardation as in the young human. These two facts together suggest that the disrup­ tion of brain protein synthesis by high phenylala­ mine levels in infants may account for the mental retardation observed later in these children. Much work remains to be done to confi~m this possibility. However, it is clear from the review and research described by Waisman that neurochemis­ try has the tools that will lead to an understand­ ing of - and therefore perhaps control of - these inborn errors of metabolism which otherwise can lead to lifetimes of personal tragedy for the af­ fected persons and their families. The final section of these Proceedings deals with neurochemical processes which occur during brief behavioral experiences, particularly learn­ ing. The reported research has been motivated by the search for processes which underlie the encoding of memory, although the identification of these processes is not yet certain in the various studies. Geller and Jarvik begin with a discussion of short term and long term memory storage processes, and describe the induction of retrograde amnesia by various agents as evidence for these processes.