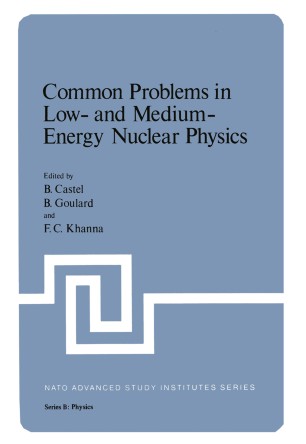 The 1978 Advanced Study Institute in Nuclear Theory devoted to common problems in Low and Intermediate Energy Nuclear Physics was held at the Banff Centre in Alberta, Canada from August 21 through September 1, 1978. The present volume contains the text of 25 lectures and seminars given at the Institute and illustrates the directions that nuclear physicists are taking in the evolution toward a unified picture of low, medium and high energy phenomena. Recent attempts at unifying the weak and electromagnetic inter­ action in particle physics have led naturally to question their role in nuclei. The success of the quark model at interpreting the new resonances in high energy physics makes it imperative to consider their role in dealing with nuclear physics problems at the microscopic level. Is our present knowledge of the nuclear potential consistent' with recent experimental evidence at low and medium energy and can it correlate meaningfully nuclear and pion physics phenomena? These are some of the fundamental questions debated in this book attempting to offer a consistent picture of the nuclear system as it emerges using the electromagnetic, weak and strong interaction probe. The lectures and seminars forming the present volume have been divided into four sections dealing with a) the weak interaction, b) quarks and nuclear structure, c) physics of electrons, protons and kaons, and finally d) pion physics.