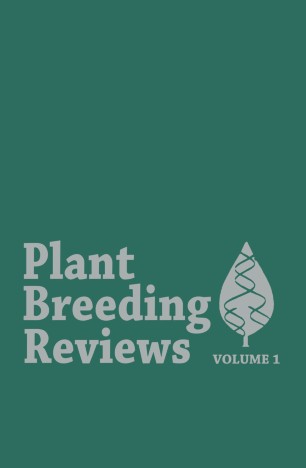 Plant breeding, the domestication and systematic improvement of crop species, is the basis of past and present agriculture. Our so­ called primitive progenitors selected practically all our present-day crop plants, and the improvement wrought through millenia of selection has so changed some of them that in many cases their links to the past have been obliterated. There is no doubt that this ranks among the greatest of human achievements. Although plant breeding has been a continuous empirical activity for as long as humans have forsaken the vagaries and thrill of hunting for the security and toil of agriculture, genetic crop improvement is now very much of a twentieth-century discipline. Its scientific underpinnings date to the beginning of this century with the discovery of Gregor Mendel's classic 1865 paper on the inheritance of seven characters in the garden pea. If any science can be traced to single event, the best example is surely found in the conception of modern genetics that appears in this single creative work. The relationship of plant breeding progress to advances in genetics has become closely entwined. Mendel himself was concerned with crop improvement and worked on schemes for apple and pear breeding. Plant breeding also has claims on other scientific and agricultural disci­ plines-botany, plant pathology, biochemistry, statistics, taxonomy, entomology, and cytology, to name a few-and has also impinged on our social, ethical, economic, and political consciousness.