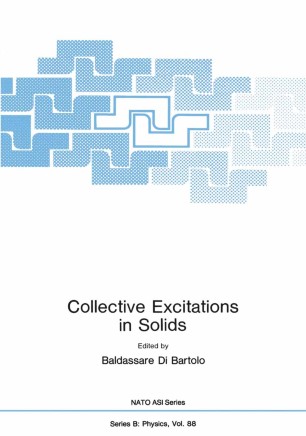 This book presents an ac count of the NATO Advanced Study Institute on "Collective Excitations in Solids," held in Erice, Italy, from June 15 to June 29, 1981. This meeting was organized by the International School of Atomic and Molecular Spectroscopy of the "Ettore Majorana" Centre for Scientific Culture. The objective of the Institute was to formulate a unified and coherent treatment of various collective excitation processes by drawing on the current advances in various branches of the physics of the solid state. A total of 74 participants came from 54 laboratories and 20 nations (Australia, Belgium, Burma, Canada, China, France, F. R. Germany, Greece, Israel, Italy, Mexico, The Netherlands, Pakistan, Poland, Portugal, Romania, Switzerland, Turkey, The Uni ted Kingdom, and The United States). The secretaries of the course were: Joseph Danko for the scientific aspects and Nino La Francesca for the administrative aspects of the meeting. Fourty-four lectures divided in eleven series were given. Nine "long" seminars and eight "short" seminars were also presented. In addition, two round-table discussions were held.