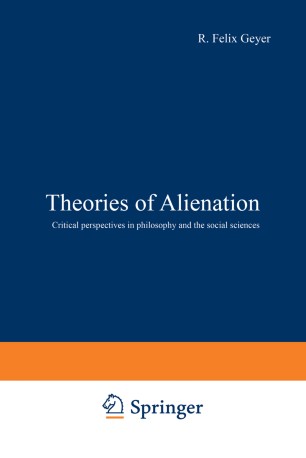 Critical perspectives in philosophy and the social sciences

The original papers which appear in this volume were initially presented in a series of sessions of the Ad Hoc Group on Alienation Theory and Research at the 1974 World Congress of Sociology in Toronto, Canada. This group was organized by the editors as a result of their longstanding research and teaching interest in the field. The purpose of the Toronto sessions was to provide an international forum where scholars and researchers could come to­ gether for a personal exchange of ideas and research findings. To our know­ ledge this was the first forum of its kind concerned specifically with aliena­ tion theory and research. More than fifty theoretical and empirical papers from thirteen countries and several overlapping disciplines were organized into panels and workshops during the span of four days. The response to these sessions indicates that interest in the study of alienation by philosophers and social scientists continues unabated. The Toronto sessions were organized largely around a fundamental concern for further theoretical development and conceptual clarification in the alienation field. The papers selected for this volume reflect this thematic concern. Although many excellent empirical papers were presented, it was generally felt that meaningful empirical research would benefit from a continued elaboration and refinement of alienation theory. The present collection is consequently geared to problems of meaning, theory, and method. Considerable emphasis is also placed on a critical evaluation of the alienation theme as it has evolved from social philosophy to empirical social research.